SSE customers will see an average 8.2% rise in gas and electricity prices from 15 November, the company has announced.

The energy firm said the rise reflected higher costs of buying wholesale energy and paying to deliver it to customers’ homes, plus government levies.

The price rises will affect about 4.4 million electricity customers and 2.9 million gas customers, not including those on fixed-price tariffs.

Robin Brant
Political correspondent
Energy prices are centre stage in the push to deal with what Labour leader Ed Miliband calls the “cost of living crisis”.

He has promised a temporary price freeze if Labour wins the next election. He’s blamed the big six energy firms for failing to pass on any fall in the wholesale price of gas.

But the Prime Minister, David Cameron, believes you can’t buck the market. He thinks the best way to help prevent more price rises is to increase competition, by encouraging people to switch supplier more.

He’s also promised a new law to ensure people are offered the lowest tariff. David Cameron wants to shift the focus of restricting price rises on to green taxes, which make up part of your bill.

It’s only a small percentage of what you pay but the government, or at least the Tory side of it, is looking at exempting some smaller firms to encourage them to compete.

While the parties disagree on how to tackle rising bills, the decision by SSE to put their prices up by 8% means the political stakes have just been raised.

He told BBC Radio 5 live: “I would encourage all customers to look again at their tariffs and see whether they can switch to a cheaper tariff.”

He added the long-term answer to high energy bills was “more competition and encouraging consumers to shop around”.

Caroline Flint, shadow energy secretary, said: “When times are tough energy companies should be helping their customers not hitting them with more price rises to boost their profits.”

SSE last increased its prices a year ago. It has now pledged not to raise them again before autumn 2014.

“We’re sorry we have to do this,” said SSE’s Will Morris.

“We’ve done as much as we could to keep prices down, but the reality is that buying wholesale energy in global markets, delivering it to customers’ homes, and government-imposed levies collected through bills – endorsed by all the major parties – all cost more than they did last year.”

SSE, made up of Southern Electric, Swalec and Scottish Hydro, said that for a typical dual-fuel customer, wholesale energy prices had gone up 4%, paying to use delivery networks was 10% more expensive, and government levies were 13% higher.

About two-thirds of a household fuel bill goes on the cost of wholesale energy, the cost of running an energy sales business, and on the companies’ profits.

Graphic on domestic gas bills and wholesale prices
Up to 11% goes on government programmes to save energy, reduce emissions and tackle climate change, according to regulator Ofgem. SSE said it wanted this to be included in general taxation, rather than added to bills.

However, Energy Secretary Ed Davey said: “Half of an average energy bill is made up of the wholesale cost of energy. This far outweighs the proportion of a bill that goes to help vulnerable households with their bills and to cut energy waste.”

The latest calculations from the regulator found that the average profit margin made by an energy supplier on an average £1,315 bill is £65.

However, this figure can be volatile. The snapshot profit margin has risen above £100, but has also fallen to a negative figure at certain points in recent years.

Political row
Profit levels prompted Labour leader Ed Miliband to declare that gas and electricity bills would not go up for 20 months if Labour won the 2015 election.

It is a tricky issue for the prime minister: stand firm on the eco charges and he risks alienating Tory voters; bend and he is vulnerable to the allegation that he is condemning the neediest to being unable to keep themselves warm”

image of Robert Peston
Robert Peston
Business editor
Read more from Robert
Prime Minister David Cameron condemned the pledge as a “gimmick”, saying the government was simplifying bills to make it easier for consumers to switch suppliers and encourage competition.

SSE, formerly Scottish and Southern Energy, said it expected its annual profit margin to average about 5% over a three-to-five-year period, which it believed was “a fair amount”.

It said its profit margin was 4.2% in the 2012-13 financial year and was expected to fall short of the 5% target again this year.

“We know we will come in for a great deal of criticism for this decision and politicians will no doubt be lining up to condemn us,” said SSE’s Mr Morris.

“But over many years, policymakers themselves have failed to highlight adequately the cost to consumers of the policies they have pursued in government.

“They can’t expect to have power stations replaced with new technologies, the network to be upgraded and nationwide energy efficiency schemes all to be funded for free.

“And as an energy provider, we are in the unenviable position of having to pass this cost on to consumers through energy bills.”

The announcement comes about a year after the last set of gas and electricity price rises.

Between August and December 2012, the “big six” energy companies outlined price rises of between 6% and 10.8%.

Chart showing the pattern of energy company price changes over the last three years
At that time, the companies blamed rising wholesale prices, the cost of transporting energy to homes, and the increasing cost of government social schemes for the increases.

Advice line National Debtline said it had received a record 15,502 calls from people seeking help with energy debts in the first six months of this year. This was up 10% on last year.

Adam Scorer, of watchdog Consumer Futures, said: “SSE and others who follow need to demonstrate why this rise is justified.”

Q&A: Are UK bills too high?
How to cut your energy bills
How to read your gas bill
Q&A: Energy bill
Latest news

-8
Comment number 1195. jon
10TH OCTOBER 2013 – 15:28
I read my meters monthly and compare useage with earlier years. Oil and gas have become more costly to produce AND import, so it’s up to me to keep a lid on things. Closing doors to unused rooms, drawing curtains across windows each evening, wearing suitable clothing, using the microwave whenever possible, using the shower – not the bath, sealing windows I don’t need to open – the list goes on !

+23
Comment number 1098. governments lie
10TH OCTOBER 2013 – 14:54
I’m an SSE customer and would swap supplier but I know from previous experience that I would be ripped off by the new one within a couple on months. Although not strictly a cartel the big six trade between themselves adjusting prices to suit themselves, it’s not illegal, just morally indefensible.

+50
Comment number 264. rifak666
10TH OCTOBER 2013 – 11:52
What isn’t common knowledge is the extra green taxes the government has put on carbon fuels over the last few years, I worked at a now closed coal station & the disposal tax on ash was £8 a tonne until 2011 then it went up to £60, it sanctions like this that are having a dramatic effect on a generators profits same goes 4 green green subsides they’re being reduced again this feeds onto bills.

+112
Comment number 262. Ian
10TH OCTOBER 2013 – 11:52
The wholesale prices may have increased, but are they higher then a couple of years ago?
Remember that after the last big wholesale increases, the energy companies put their prices up, but never reduced them (or not by much) when wholsale prices came down again

What we need is total transparency in energy companies accounting, so we can see exactly how much profit they make and their admin costs

-71
Comment number 248. matchico
10TH OCTOBER 2013 – 11:49
I don’t understand why people are still moaning… I have been on the cheapest tariff for years by regularly switching to the best fixed price contract!
People should just get their fingers off their backside and switch! If SSE was loosing a big chunk of its customers overnight they would think twice before a price increase. Unfortunately the majority is either too lazy or too ignorant…

Comments 5 of 10
Show More
Sign in with your BBC iD, or Register to comment and rate comments
All posts are reactively-moderated and must obey the house rules.
Share this page 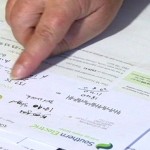