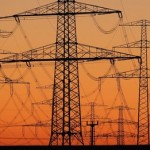 The investment programme will hook up new wind and nuclear generators to the grid and run more high voltage cables underground, among other things
Continue reading the main story
Related Stories

Warning over growing fuel poverty
‘Unwelcome’ rise in energy prices
Npower adds to energy bill rises
The energy regulator will permit firms running the UK’s electricity and gas grids to add an average £12 to annual energy bills for the next eight years to pay for upgrades and maintenance.

Ofgem said it had cut £7bn from the total cost of work on UK transmission networks planned by energy firms.

The biggest of these firms by far – National Grid – said it was reviewing the “lengthy and wide ranging” plans.

Energy prices have risen 7% on average this year, according to the Fuel Poverty Advisory Group, and are set to leave more households paying more than 10% of their income on home heating unless the government takes action.

Tax change
Ofgem’s announcement will enable £24bn in total investment in the energy networks up until 2021.

However, an Ofgem spokesperson told the BBC that over half of the £12 bill increase was not due to physical investment in the network, but was instead because of a change in accounting rules which would mean that energy firms could no longer claim back tax on the cost of replacing parts of the network.

The regulator’s announcement represents a slight increase on the £22bn investment allowance that Ofgem initially proposed in July – adding an average £11 to bills – which was attacked by National Grid for being insufficient.

Continue reading the main story
What is fuel poverty?

A household is considered to be in fuel poverty if more than 10% of its income is spent on home heating.

Warning over growing fuel poverty
Government ‘responsible’ for fuel poverty
“In analysing the proposals, we find numerous errors and questionable judgements which we cover in detail in our response,” the company had said of the initial plans in an open letter to Ofgem.

Under Ofgem’s revised proposal, the average increase in annual bills between 2013 and 2021 will equal £12, starting close to £8 at the beginning of the period, and rising to £15.10 by the end.

If National Grid chooses to challenge Ofgem’s new decision, it has until March to refer the matter to the Competition Commission.

National Grid and the distribution firms do not charge households directly for the cost of maintaining the grid, but the cost is instead passed through by electricity and gas suppliers.

The total cost of transmission and distribution comprises about 21% of gas bills and 10% of electricity bills.

Underground cables
Ofgem said that the increase in allowances compared with their July proposal was because the regulator had agreed to let gas network firms charge more for the cost of replacing gas mains.

The electricity network in Scotland is owned by two other firms – Scottish and Southern and SP Energy Networks.

Ofgem had already reached an agreement with the Scottish firms in March over their investment plans, the cost of which will contribute £3.70 of the £12 average bill increase, to be borne equally across all UK households.

The planned investment spending across the UK is split between £15.5bn on electricity transmission and distribution, and £8.7bn on gas.

The investments will, among other things, hook up new wind farms and nuclear power stations to the electricity grid to replace traditional coal-fired power stations, and enable more liquefied natural gas imported from Qatar and elsewhere to be added to the gas network as North Sea gas supplies dwindle.

Other improvements will include the running of new and some existing high voltage cables underground, particularly where they affect areas of outstanding natural beauty, and the construction of a new undersea link connecting Scotland with England and Wales.

The spending on the gas network will also finance spending by the energy firms on raising public awareness about the risk of carbon monoxide poisoning.

Your comments (717)
More on This Story
Related Stories